Two years ago I got approached by the Kidney Foundation to participate in the brush of hope campaign they do. They get musicians, artists, authors, athletes and all kinds of people to paint a small work for them and then they auction it off to raise money for the Kidney Foundation. I was flattered and said yes. A friend of mine who owns a venue in Chilliwack bought that one. Here it is… 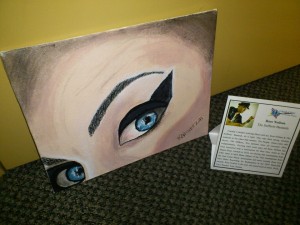 This past year I reluctantly said yes when I was asked again. Not because I didn’t want to or didn’t enjoy the previous but because I was super busy. As it turned out I had a nice window of opportunity to head out to a lake near Fredericton where my family has a cottage and get it done. My earliest memories of life are from this cottage. It used to belong to my Grandparents. I spent every summer here hanging out with cousins, chasing bull frogs, roasting marshmellows and enjoying family life. After my Grandparents passed away my Mother made a bold move to keep the cottage in our immediate family and purchased it from the estate. Now, in the summer, she spends most of her time there painting (she’s an artist), listening to the loons and watching the incredible sunsets. 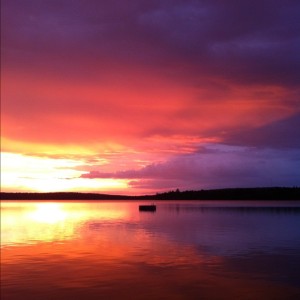 When I decided to do these paintings I knew I wanted to go out to my family camp and hang out with my Mom while painting. One, because that’s just a good afternoon. Two, because my Mom is a talented painter and I knew she could give me some much needed instruction. I used to paint when I was a kid. In fact my Mom and I started going to painting classes together when I was twelve or so. Then I got into music and left painting behind. My Mom on the other hand ran with those brushes to become a gifted painter and teacher. Anyhow, I drove out to the lake, for a visit, with my canvass and brushes in hand. I chose an image I captured while in the Mississippi Delta in February of this year. I started to paint away under the occasional helpful tip from Moms.

I grew increasingly frustrated as I went on. Brush by brush I got more angry. The painting looked awful. I was so upset. I had enjoyed the experience of the previous year and this was the polar opposite. I recall pretty much throwing a juvenile fit I was so disgusted.

I swore I wouldn’t do one next year I was so upset with it. A few hours later I was putting the clear coat on a painting that I actually liked. I had forgotten that when painting in this landscape style, often during the process you don’t see any reward in your work. The reward comes at the end when you tie it all together then stand up and take a few steps back to get some perspective on the piece. After doing this I found I actually liked what I had done. 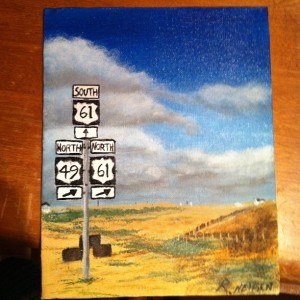 I’m a results guy. I like to see the fruits of my labour. Who doesn’t? I also tend to be wound fairly tightly a lot of the time. So when things don’t go as planned I over stress. One thing I’ve learned in the past few years (but occasionally forget and re-learn) is that when things are not going as planned sometimes you have to let them run their course. Sometimes what seems like a disaster can be the beginnings of something really fruitful and rewarding. It has taken much reminding, but I am getting better at it. Now when a gig falls through or a business plan doesn’t quite work how I had hoped I try and ride it out and let it re-shape into a new plan. You know, step back, get perspective on it, I have noticed that almost 100% of the time, when I don’t stress and freak out the issue usually resolves itself with little or no loss on my end. I’m a man of many motto’s. One of these motto’s is this: It’s good to have a plan but remember, things rarely go as planned. Life is kind of like that isn’t it? It’s hard to remember sometimes though.

I’m not saying how I live my life will work for you but it seems to work for me. Don’t get over stressed about things that you can’t control. Sometimes your world is just re-grouping to set you up something amazing. This time next week I’ll be in Louisiana preparing to make the album of a lifetime (to date) with some people I greatly respect at this studio.

Leading up to this I stressed. I freaked. I relaxed. It worked out. It’s not a done deal this recording. We still need to raise a bunch of cash but we have enough to go make the record and that is a first step. After, we’ll re-group and do what needs to be done. I’m very excited. I hope you are too.

I guess my point of this long tale is to believe that things are going to work out. If you believe this, most times they will. It’s not perfect this idea of mine so keep that in mind too but it works for me. Positivity. More Love.

PS…our campaign is still live right HERE and you can help us by pledging. Now that we’ve reached our pledge goal to keep the campaign live 10% of funds raised here on out will go to the Randy Cable Fund. This fund helps Cancer patients who are under financial duress. We help with travel, meds etc. Feel good right now. Pledge.