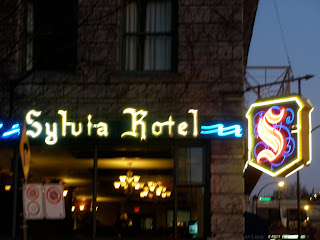 great day playing in the sun today. Lots of families out and about which is hilarious for me as the little kids really seem to like my tunes and aren’t afraid to boogie!!! I sold some Cds and made a little “guitar case” cash to boot! Not too Shabby!
So as promised, a little history of the awesome hotel I am in. The Sylvia Hotel. Located at Beach Ave and Gilford. Right across the road from English Bay. Very scenic. As I mentioned before I can see the ocean from my bed! Awesome. What I didn’t mention was…..
The Sylvia was built in 1912 by a Seattle fellow. Named after his daughter it was an apartment building first but eventually turned into a hotel. In 1954 Vancouvers very first cocktail bar was opened in the Sylvia. It was the tallest building in Vancouver until 1958 and it’s slogan was ‘dine in the sky’. 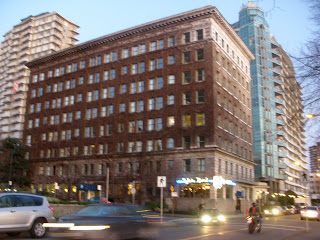 The Gilford st. side of the hotel is COVERED in Virginia Creeper where I have witnessed a half dozen raccons creeping around up high on the third and fourth floors! 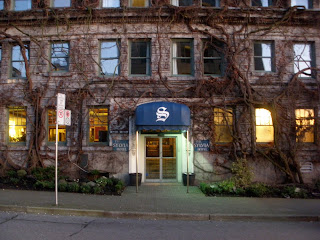 The hotel is quaint and has really nice staff who make sure you get what you need. Being here for two weeks, I of course wanted a fridge and kettle etc so I could have a few groceries and what not. Sure enought the front desk provided. A fridge was soon delivered to the room and I soon was making the best coffee in Vancouver with my aero press and kettle!
It was rumoured to me recently that Errol Flynn had actually died here. With a little research I’m not so sure that is true although there does seem to be a link to the then Manager Art Cameron who was at the party where Flynn may have actually passed….Truth? Fiction? Who knows… 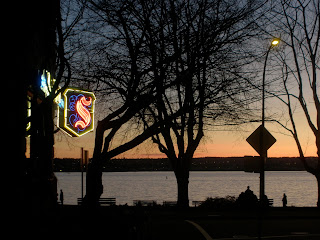