One thing that is good about waiting until your ‘mature’ years to venture into rocknroll is that you are infinitely wiser than most of the other mamby pamby bands on the road.
A lot of people ask us about eating and sleeping arrangements on the road. As for eating, we take it VERY, VERY seriously. The three of us are all righteous kitcheneers in our own rights and when out together well, it doesn’t take a rocket surgeon to know we can really throw down. As a result of this we put lots of thought in our eating time. Maybe some of you followed last tour’s blog and you realized that we take breakfast as serious as a steak dinner. Yes, those ARE Mimosa’s. 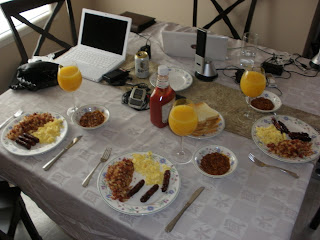 When we are trapped in the confines of Ruby’s belly we enjoy soup and sandwiches mostly. Which as it turns out is a mid day favorite for the three of us. Hard to beat a S&S.; When we have the time and resources we like to have nice meals. Last night Karl Bastards whipped up a coconut curry that was delicious! Unfortunately I wasn’t smart enough to snap a pic of it……I have just been pondering what I what I will step up with when my turn comes….. just the other day for  a measly $8 each we bought grocery for two supers, two breakfast and one roast for pulled pork sandwiches. Shawn, as it turns out is a master pork chef. Today we enjoyed some of the finest slow cooked pulled pork sandwiches known to man. to make them even better they were bathed in the best BBQ sauce this side of the sun. We have a connection in Trenton, who shall remain nameless, who makes this stuff and I am dead serious in saying it is the best! 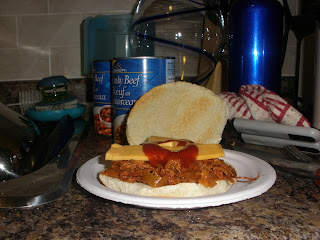 The other awesome thing about food in road life is that people often think you don’t eat so they make shit for you! This might be our favorite part! We think thanksgiving is going to be pretty lucrative in the old food dept. One of our fav stops is in Hogtown (toronto) where Karl Bastards niece lives. Tory is a fabulous chef and often fills us up with the most decadent brownies ever. This time we not only got brownies but also got Key Lime squares. If any of you know us well, you’ll know that we are Key Lime connoisseurs and these squares rock! Thanks Tory! 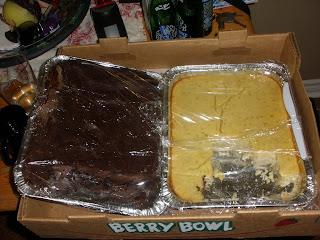 We also have with us this time a coleman stove for lunch breaks and evening cooking at hotels/wal-marts. We have yet to bust it out but when we do I’ll be sure to document it for y’all!
So there you have it folks. Not your average band cookery, we know. We are quite proud of our skills and never shy of flaunting them. So remember if you give us some floor space to barter with the Bastards cooking skills! Like our Rock, you won’t be dissapointed.
MB