Saturday I was on the road again with a long haul out of Toronto up to Espanola. I’m familiar with the area as it is passed on our Sufferin’ Bastard tours of Canada. Once I got out of toronto it was absolutely beautiful driving weather. Sunny, about 17 degrees. Full on window down, trucker tan stuff! Even the Hella Hula Hottie was digging it! 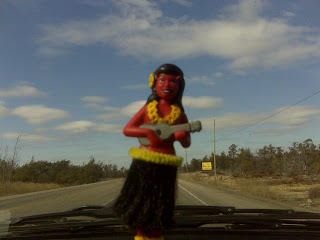 I must admit that once I had left hwy 69 for hwy 17 around Sudbury I was kinda missing the Bastards a lil as it has been almost two months of no band. I love the solo shows cause they are so different from the band, but folks I do love the band shows and I do look forward to firing the RocknRoll machine of Awesomeness up again in April. Fortunately in the mean time I haawesome shows like the one I did on Saturday to tide me over….
It’s an old school idea….a bunch of folks hanging at the host house. They bring their own booze. The listen. They are generally really awesome folks who just want to get down like james brown on a seerdee night…..The performer is set up in the corner. In this case sans PA system. We rock, we roll, we tell tales, we laugh, we cry. It is a house concert!!!!
This is by far my favorite way to dole out the goods. It is so intimate and the folks are there to see music not buy beer. Thats not to say some folks don’t get their drink on but for hte most part it is a big time “listening” crowd. I’m not saying I don’t like to rock a bar but this kind of show is a different animal.
This may not have been my first house concert but it might have been my first show where I didn’t have a mic to sing into and at first I was all like….”What am I gonna hide behind?”….well the answer is simply that there was no hiding. It was all there out in the open.
Brian and Kim Hunt hosted a real fun night for performer and listeners alike. I want to thank them and all who came out to the show all the way up there in Espanola. I had an amazing time. The highlight of the whole night for me was the group harmonies on the last tune. “Helpless” by neil young never sounded so sweet if I may say so myself. I look forward to doing it again. A HUGE thanks must go to the one and only Amy Mangan for introducing me to Kim. Thanks Amy. Here is a pic of me and the awesome hosts! 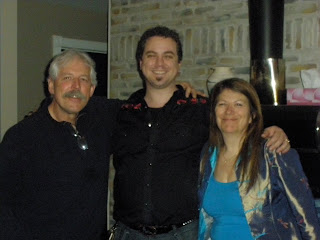