Well the Ontario portion of my solo trek has come and gone. I had a great last week. On Tuesday night I got to go out and se my old pal Jordan John. Jordans trio is smoking. Prakash John on Bass and Al Cross on Drums. Legendary. Jordan is one of those guys who is great at everything and somehow manages to be a real decent human being at the same time. I met these cats on my first trip into Ontario and it was a pleasure to catch up.
My last Toronto show was at a joint called Highway 61. Lots of fun on a Wednesday night. Good peeps and AMAZING ribs! On Thursday we made our way up to the beautiful area of Collingwood. It was a great day for driving. This little solo show was thrown together by Frank McNulty and the Collingwood Blues Society. We had lots of bums in chairs at the Art Gallery and I had a real blast recounting stories from the Mississippi trip. What a place to sing in too! Great sound!
After catching up with Allison, our go to gal in Cwood we went back to my friends Romney Getty and Craig Smith‘s place. These two are immensely talented musicians in their own right and aside from that, just real good people. Like all good rockers they know a thing or two about the rules of RocknRoll……if you need a guide line here is a good book for you to read.. 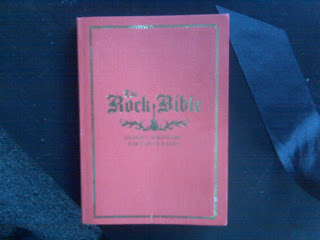 We crashed at their place and in the AM We were treated to some early mixes of Craig’s new record. It kicks ass. I can’t wait to pick up a copy in the late summer/early fall. Earlier in the week I had heard of Dan Achen’s passing. dan was a fixture in Canadian Rock with the band Junkhouse and had gone on to operate a really cool studio in a church in Hamilton. He died form a heart attack while playing hockey. He was only 51. It’s a real bummer. I was extra sad to realize that Dan had been producing Craig’s latest efforts and the two were very close friends. It reminded me (as my solo tour into Ontario always does) how closely everything is connected. My heart goes out to everyone in the steel town area as I believe the funeral is today.
After some Breakky with Craig and Romney we hit the road for my next house concert in Penetang. Saw this Sign on the way out of town….seems like good advice? 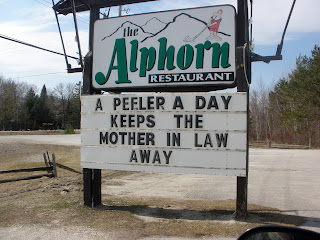 The concert here was another hook up form Frank McNulty. I had connected with Deb to perform at here and her hubby’s house warming party. Turned out when I got there that Deb and hubby Paul, run a couple festivals. After chatting I realized I, in fact, new Paul from a conference in Toronto a few years back. Again, how closely it’s all connected. The concert was fun and somewhere we got video and audio recorded. My sound guy was a chap named Scott Cooper. It turns out hat Scott works with Rob Szabo lots and is in fact mixing my other pal, Ian Sherwood’s, new record. Connected. Closely.

Saturday we had a leisurely drive to Gananoque to play at the Stonewater Pub. A tiny quaint lil place. Another show come and gone. In the morning we enjoyed a killer breakfast at a local spot and then hit the highway for the long trek home. In Quebec there was an amazing sunset. I could barely stay on the road trying to check it out. Here’s a couple pics. 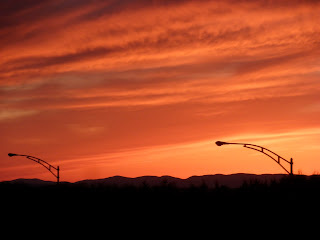 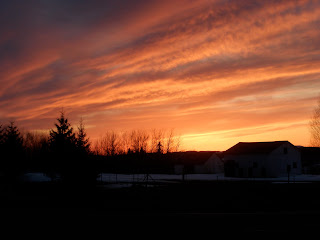 Well this week is the last three shows for the solo tour. Wolfville, Thursday, PEI friday and Hampton, NB on Saturday. Really looking forward to all three shows. After that it is time to fire up the rocknroll machine of awesomeness that is the Sufferin’ Bastards. The new cd. Redemption is being manufactured and on April 24th we will host a big release party in the governor’s Room at the Delta. Stay tuned for more info about that. Also I couldn’t wait, I sent “Afflicted” the first tune from the record to the fox today. That means you can request it NOW!
Call ’em – 506.452.2377
See ya soon
Ross