WOW. what a day we had yesterday. A friend of mine is in a Burlesque review and they were doing a show at NAIT (no this is not that place between your pink parts, it’s an educational facility in Edmonton) in the late afternoon. So after our patented bastards breakfast…… 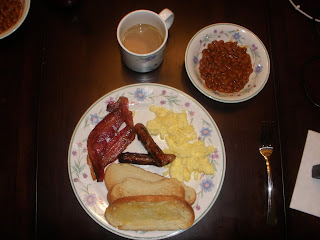 ……we headed out for a cross town Edmonton adventure. The review was good in the sense that the girls had their stuff down. nice routines and lots of titty tassles! It was unfortunate, however, that who ever was running the tech side of things repeatedly dropped the ball and the dude that was MC’ing was awful. I will say, though, that once those things get straightened out they will have a kick ass show as the girls are top notch! way to go Hook’em Review! I’ know I’ll be back!!! Unfortunately I didn’t get any pics for you as I was too busy oogling.
After that titillating experience we busted down to the south end and got a half hour of the guitar clinic that our pal Grady Johnson was putting on. We had a good brief chat and he applauded our “lateness due to titty excuse”.  We had intended on heckling a bit but my question got hijacked by the wang in front of me…..We did hear some very cool studio tricks though. Lots of info to ponder. Grady was playing a block away from us on Whyte Ave so Gordie slapped us on the list so we could sneak in for a quick tune or two between our sets. They sounded kick ass as usual. thanks to Gordie for the hook up. They are touring Canada right now in support of their new record and I suggest you check em out.
After the clinic we went back to Whyte ave to grab a quick bite and then load back into Blues on Whyte for a hump day show. We grabbed a bite at the Elephant & Castle across the street. Beef dip wa ok but the salad was shitty wilty lettuce. We did get to run into a dude we met last time we were here though. Seems he’s relocated to Edmonton permanently and actually runs the kitchen at the restaurant that gave us the shitty salad. (yes, thats right folks. We eat salad on the road.) After our meal we hit the stage …….. 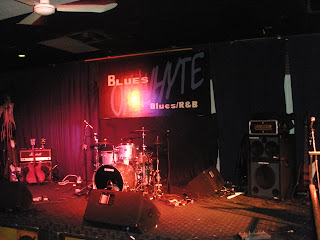 and rocked out another wednesday night. The crowd keeps getting a little larger each night as we work for the weekend when it will be packed. Had lots of fun and ALMOST killed my self climbing over chairs and tables whilst rocking a solo on Mailman Blues. Sooner or later I know I’ll fall on one of these adventures but it ain’t happened yet!!!
Karl got to drive our compound manager, Jeeem’s Charger home as Jeeem had too many pops to drive. Here is Jeem….. 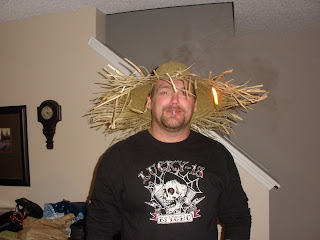 …..As Shawn and I were on the way home we realized that Ruby was about 15km from turning 300 000. Amazing. We were going to drive around for a bit until she rolled but thought it wasn’t right that Karl Bastards wasn’t with us so we went straight home. She’ll roll today fo’ sho’. Seems like just yesterday when I got Ruby and she had a measly 137 000 KM on her. Two years later she’s been all over this great land and we have to raise a glass to her because she is the real thing that keeps us doing what we do. Her face might be a little smashed up and maybe she makes the odd noise or two when you’re humming along but she still gets us there. We love you Ruby…… 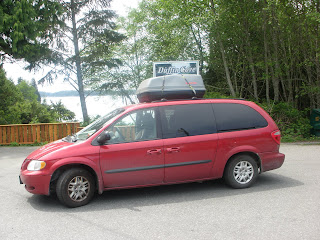 After we got home we encountered a rare Albertan Snake Mouth at the compound and there were a couple attacks. somehow we managed to get a video of it. These things are rare but extremely aggressive. If you see one you can bet your head will hurt in the morning. Here’s the Video…..

Well we just finished an amazing breaky. This time we upped the anty with the addition of Perogies. A fine decision if I do say so my self…….. 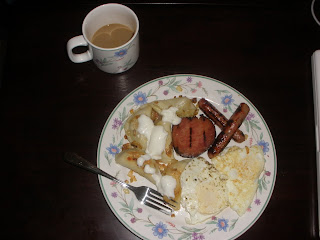 Soon we’re off to see the movie Zombieland. This is a big step for me. Up until recently I was afeared of Zombie’s so to be able to confront my fear and see this flick is pretty awesome. I’d say I’m growing as a human being.  After movie time it’s a bison roast dinner, coutesy of Karl Bastard’s sister, before we head back to Blues on Whyte to rip another piece of them. I hope fall is treating everyone well and that fluffy white stuff isn’t bringing y’all down.
talk soon
MB
PS….If you are reading this on Face book feel free to come on over to www.rossneilsen.blogspot.com  I don’t think you can see the video on FB. feel free to subscribe so you can get some chuckles added to your life at our expense.