I’m not what I would call a christian or religious person, though I do have my beliefs and certain way I like to live my life. In my life, I noticed some time ago, that there were often obstacles and often signs to help me deal with those obstacles and tough decisions. Sometimes, when a person is told about a phenomenon or re-occuring thing that happens in the world, they suddenly start to notice it. For example, if you bought a Dodge challenger, you might notice them more on the road. Once I started realizing there were often “signs” (for lack of a better word) in my own life that seemed designed to help steer me I started noticing them more often. Every year there are things I learn, forget and re-learn. I re-learn to read these signs as I often forget as my mind gets clouded with the everyday rat race going on.

I am taking a moment to reflect on the first few weeks of this year and how great it has been. I took my band to Dockside Studios, where many of my heroes have recorded, to work with Anders Osborne and Warren Riker. 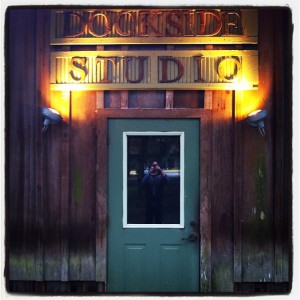 We took a detour to Macon Georgia to visit The Big House which is The Allman Brothers (my fav band) Museum. I got to play Duane Allmans 1957 Goldtop Les Paul he used on the first two ABB albums as well as the Layla Sessions with Eric Clapton. We saw rare footage seen only by a few people of the Allman’s performing including the previously mentioned guitar. 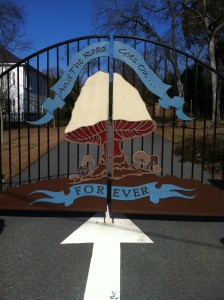 As I sit and listen to the mixes from our recording session, trying to whittle down the track list and get a proper sequence, I am spending a little time reflecting on how I got to this point. Sometime around 2010 I started listening to Anders Osborne on youtube. He seemed to sit in with lots of people I admire. This led me to check out his albums. Great songwriter and an amazing singer and guitarist. In 2011 I attended a blues conference in Toronto where Bruce Iglauer, owner of Alligator records, was a featured speaker. Bruce spoke about making records for lots of the old blues artists in the 70s but he also mentioned a fellow named Anders Osborne who is on his label and spoke briefly about how Anders made records. There it was again, that name. As I stood outside the theatre where the Maple Blues awards were to be held at the end of the conference I watched Bruce walk in the theatre. I thought to myself, how cool would it be if I was sitting next to him? Sure enough when I went to find my seat, who was on my right elbow but Bruce Iglauer.

Fast forward to fall of 2011. My good pal Steve Marriner told me to check out an artist named Johnny Sansone‘s latest record, “The Lord Is Waiting And The Devil Is Too”. Curious title I thought. I searched around for it, even emailing Johnny to ask where I could find it (I don’t do the itunes thing…yet). I went without.

Early January 2012, I got a note from my talented pal Dylan Wickens. Dylan was supposed to go play some guitar at a festival in Mexico bt couldn’t go. Would I take his place? I sure would. Next thing I know I’m in Mexico at a festival. Playing guitar on the beach. Amazing. 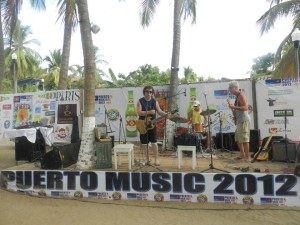 Even more amazing, I missed Johnny Sansone by two weeks. He had been at the festival prior to me. I was bummed I missed him. My frown turned upside down though…Before I left the festival promoter slipped me a copy of Johnny’s latest album. The one I had been searching for! When I got home it quickly took over my cd player. It was on endless rotation. Kick ass guitar tones. Thundering drums. Dark, disturbed singing an some DEEP harp playing. Wow. Who produced this album? Anders Osborne.

Early summer 2012. I’m starting to think about people to produce the new album. We had a long list of names ranging from friends to long shots. Then one night after listening again to Johnny Sansone’s album and a new track from Anders Osborne’s latest album “Black Eye Galaxy”, I suggested we look into having Anders produce. I found him on facebook (good old facebook) and sent him a note. He replied that he would take a few days to listen and get back to me. A week later we were on the phone making our plan to record in Louisiana in early 2013.

The night before we leave for recording: Something flashes through my brain. I sit down at the computer to load up mapquest. Macon Georgia, one of my five music destination cities in the USA, is only a two hour detour on our way to Louisiana and a city FULL of music history. From Capricorn Records, The Allman Brothers Band, Otis Redding to the corner where Duane Allman was killed in an accident and of course his final resting place. There is much to see in Macon. I message Karl, my drummer, to get his input as I often do. Karl thinks it is a good idea. The plan is set. Detour it is. I email The Big House to see what the chance is of them letting us in an hour early since we’ll be time pressed. “Since we’re coming from Canada…” they will graciously allow us in an hour early! I’m excited.

Two days later we pull into a sleepy Macon Georgia. The next morning we go straight to the museum and meet our wonderful hosts. They give us the lowdown on the museum and we take an hour to stroll through. So much to see. So many cool rocknroll artifacts from Duane’s 57 Gold Top to the lyrics for Blue Sky which were written in that house to the room where Berry Oakley and his family stayed. All restored to how it was in 1970. Heavy vibe in Duane’s room as I look out the window to the street thinking to myself how many times Duane must have done the same thing. I slip out to the van to grab cd’s for everyone as gifts because they were all so nice to us. I had a couple copies of REDEMPTION over to a board member and the archivist as they have a smoke. I slip back to the van to grab another disc and when I come back to them they have noticed that Cody Dickinson produced the album and we get into a conversation about music and mutual acquaintances and what we’re doing in the south. After a few moments the board member suggests to the archivist that he let me play “that guitar”. Moments later I’m kneeling on the floor playing Duane’s legendary ’57 goldie. I am moved both by the generous gesture and by the power of the instrument. I nearly wept. Later that day we visit Duane’s grave so I can play him a tune. A warm breeze blew upon me as I started the opening riffs of “Goin’ Down Slow”. 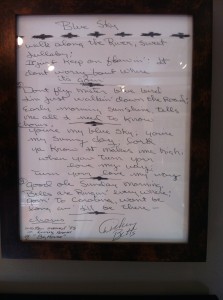 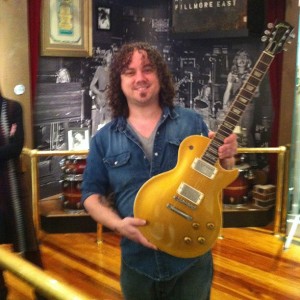 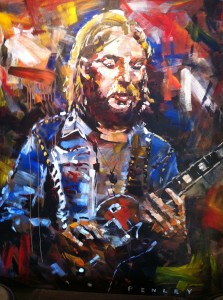 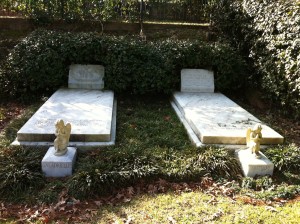 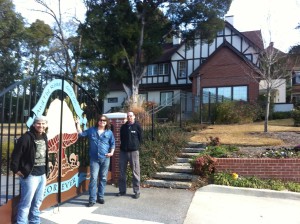 After we pay our respects we hop back in the van and head for Louisiana with a SERIOUS vibe goin’ on! The next morning we load into the studio and become fast friends with our production team. All serious MF’s at their craft with a lot of cool stories/history to tell us throughout the week. It was an intense, exhausting week of tracking and mixing. We wrapped our recording sessions with a dinner in the upstairs apartment. We got a stuffed, de-boned chicken from world famous Heberts in Maurice and some cornbread and had a feast! In the end we managed to pull it off and come home with a new album that we’re all very proud of. It’s fresh and has some new sides of the Ross Neilsen Band. We’re excited to release it. 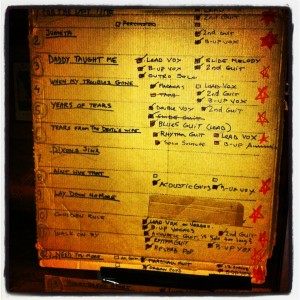 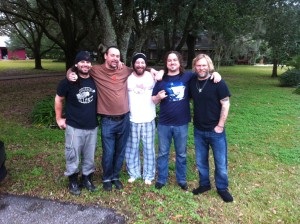 The release party in Fredericton will be May 11th, 2013. We’re going to have a nice dinner party in the meeting room at the York St. Liquor Store. We’ll be importing that very same crawfish stuffed, de-boned chicken from Louisiana that we enjoyed at our recording wrap party. We’ll be serving it with cornbread, fiddle heads and maple glazed sweet potato. For dessert we have Fredericton’s own Hot Lollies providing their amazing cheesecake goodness. Picaroons will be supplying the beer and I’m wrangling a wine supplier right now as well. After dinner we’ll play the album live and then hand over some signed copies to our 50 guests. It’s all included in the $100 ticket price. Sound steep? Well it’s not a show designed for everyone. It’s designed for our hardcore fans, friends and family. It’s going to be an evening to remember. I can’t wait.You can get tickets at our Pledge Music Page or contact me through the email on this site and we can reserve a ticket for you with a credit card. In the meantime, while the album is being completed, I’ll be out across Canada touring my solo cd The Shack Up Sessions. Check out the Dates page on here to see if I’m coming to visit you!

So what has been the point of this story anyway? My point is that the world wants you to win. The vibes you put out often are the vibes you receive back. It took a long time and many events to happen for me to be in Macon playing my heroes guitar and then to work with some people I admire greatly. To create with these people and make something that will, hopefully, bring joy to other people as well. “RESURRECTION” (yup, that’s what it’s called) was made with good vibes and it will hopefully continue to spread that into the world.

So the signs are out there people. If you’re lost or just need a little nudge in the right direction…keep your eyes open. Help comes in many forms so long as you believe it’s on the way. I’m gonna leave you with a note Duane Allman wrote the new years day 1969. 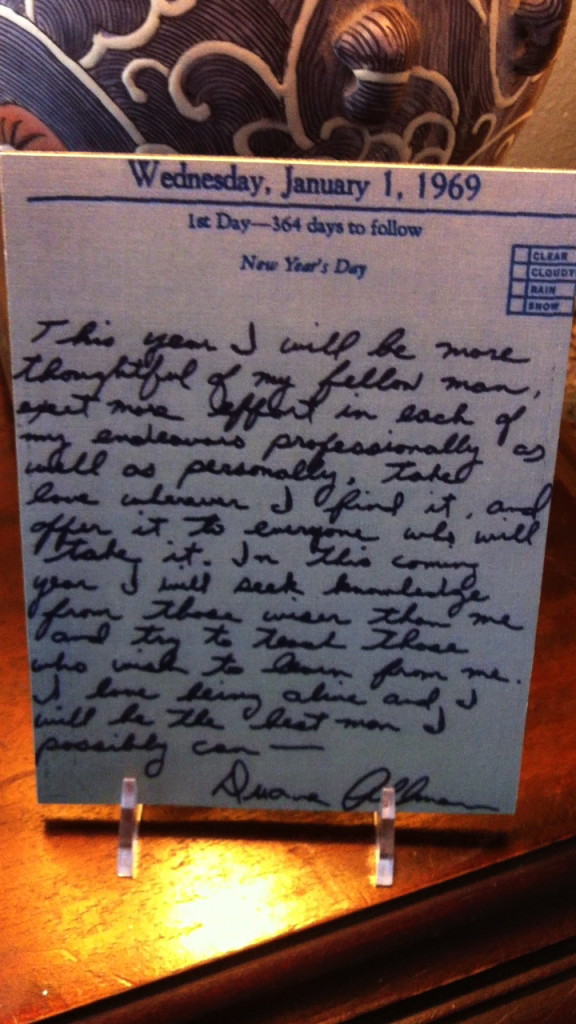