Well, we’re in Edmonton. We’re 2/3 through this tour. I’ve been internet restricted as my phone crapped out on me and I can’t access internet on it, or text or email or anything for that matter. Works great as a phone though, but who uses their cell as a phone these days???

We’ve been all the way out to Vancouver island and back since the last post. We played the Yale in Vancouver on a Friday. Had a great time! Lots of Dancing. It was nice to get back in there before they close the doors for an extensive renovation project. Had a major fun Halloween show in Tofino. Our whole time on the island was great actually. It still is as magical as it was the first time. How can you go wrong with view like these? 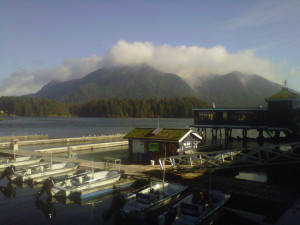 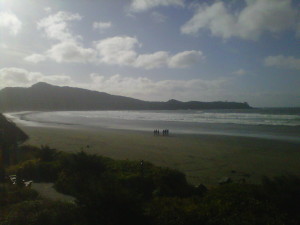 We hooked up with our pals in MONKEYJUNK in Crofton BC for a show. The boys sounded so good. If you haven’t heard their album “To Behold” you should. Its a gooder and available on Stony Plain Records. The Junk we kind enough to get me up at the end of their set for a jam. Great fun playing guitar along side Tony D! 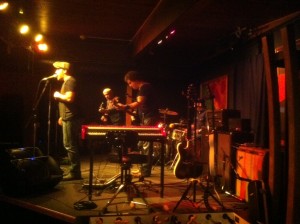 My personal fav gig on the island was a house concert we did at our friends, Ken and Lynda’s place. Great crew and killer hospitality. Karl Bastards and I had a lot of fun listening to tunes and telling tales way into the wee hours with our hosts. Really fantastic time! 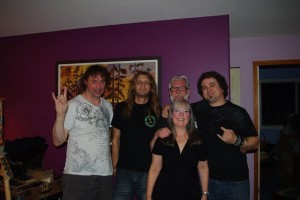 After finally leaving the island we played one more show in Vancouver at Falconetti’s in the east end. Pretty good time. We had a funny drive into the city too. A fella in a BMW rolled his window down to yell at us that their was something wrong with our tire and we should check it out asap. Turns out dude has never seen, or heard, studded snow tires before!

We spent our days off at my sisters place and Karl’s folks in the Okanagan, My sister delivered an epic day of course after course of appetizers paired with incredible wines. I can’t recall the last time I had such a great food/wine experience. She moved to the Okanagan in the summer to chase her dreams in the wine industry and has really been killing it! If you dig wine check out her awesome blog HERE

After a quick visit with the Padre and the Sniper on Carrs Landing we hit the road for a quickie in Robson at the Lion’s Head Pub. We discovered this spot last tour and we were stoked to go back. Great pub, amazing people. The owners treated us to breakfast in the AM and the real treat was moose sausage! DELISH!

After Robson we barreled to Kamloops for a couple shows. The second was at our fav little joint in the area, The Westsyde Pump. This place is way out in the west end and we discovered it on our first tour when Ray Nyuli brought us in for a few shows. The staff here are awesome and the crowd loves to rawk! Love that joint!!! We were amused to see Ray’s face on a poster on the road as he’s now running for council there.

After the Loops we drove to Banff to spend our two days off relaxing before our shows there at the Rose n Crown. We spent our first night off pub hopping with our old friend Newt. We caught a set by Five Alarm Funk out of Vancouver. Man did they ever rock it! Furious funky stuff! Lots of fun! Doni and Jim at the band house showed us good times and the staff at the Rose looked right after us! Always a treat to spend multiple days in the rockies. After Banff we had a slow but beautiful drive to Jasper. We rawked a classic great Downstream Bar crowd. This place is one of our favs with lots of loyal fans! Big ups to Soto and his crew there for treating us right!

With Jasper under our belts, we drove the farthest north I’ve ever been in Canada. Grand Prairie. We played Better Than Fred’s and we’re treated to some great steak sammiches from the bar and some complimentary shots and beers by the patrons and staff. On a side note, quite possibly the hottest staff in Alberta with the exception of Red Deer. It’d be tough to choose! We rawked a couple sets and had a ball. After the show we relaxed at the great band house. Giant screen TV and XBox. Shawn Bastards and I killed nazi zombies till the wee hours.

Yesterday we had a brisk drive down to Stony Plain where we were all set to rawk the Early Stage Saloon. We had the best crowd we’ve ever had there and had a ball with them. sold some merch and had some laughs! Great night. Big thanks to our pals John and Carmen for having us again and again.

Now we’re holed up in the Edmonton compound. Burgers are on the go as I type and I’ve got my eye on a delicious bottle of chianti. Tomorrow I’ll venture to the mall to try and get my damn phone fixed so I can remain more up to date for the rest of the trip.

If you didn’t know, we added some shows on the way home. Winnipeg, Kenora, wabigoon etc. Check em out and get on out to a show! I hope you’re all well and warm. It’s -20 here and we’re not digging it at all.

Before I go I want to mention that my fundraiser for my solo trip to Memphis in February to compete in the International Blues Challenge will be held at Dolan’s Pub in Fredericton on Wednesday Jan 18th. I’d love to see y’all out there in the crowd! Keep an eye on the website too as I’ll be posting solo tour dates for 2012 up here fairly soon.