Today was a long day of driving. We decided to push hard so that tomorrow will be a short drive enabling us some brain dead/relax time to mentally prepare for the very intense five days that will follow. Saw some cool stuff today. Passed Roanoke VA, Nashville TN, we’re currently pulled off of “music highway”. No am not making that up. Thats what it’s called. All very surreal.
We also ate at Cracker Barrel. There is one about every 25 miles. For real!It was alright and quite cheap! Karl and I had chicken and dumplings with veggies, Shawn had catfish as he usually does when it’s available…. 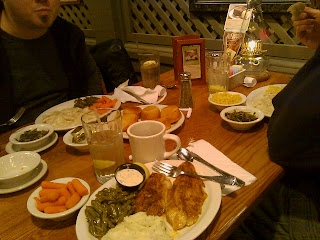 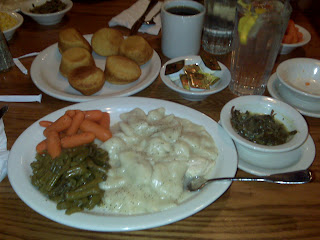 Ten years ago (actually a little more) when I met Shawn at my friends house (he was playing in my buddy’s band) I never would have thought we’d be cruising by Nashville on our way to Mississippi to make a record. About the same amount of time ago I worked at Tony’s Music Box with Karl. I again, never would have thought we would be in a band together traveling south to make a record. Crazy surreal day. Awesome. This artsy pic is Ruby’s rear. Waht you can’t really see is that beyond her ass is Nashville. 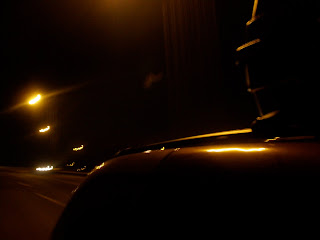 Tomorrow we head to Mississppi via Memphis. If it isn’t to pricey we’re gonna stop in at Graceland and see how the King lived. After that its focus time for a week of hardcore work. I can’t wait! That blurry green sign says MEMPHIS!!!!! 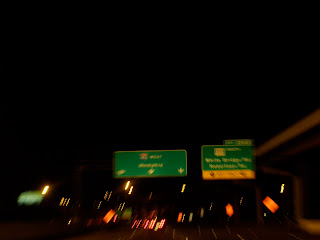 Two things have been concerning me….1. my throat is STILL sore. Cross your fingers for me that tomorrow is a better throat day. 2. the further south we go, the colder and snowier it gets. Thats messed up. Don’t believe me? Here’s a video….