*This is update Four of Four today. If you’re just tuning in scroll down!
Dude is whack! He has a total thing going on. Super nice to us and we appreciated him letting us sit in…He used his sock for a pop sheild aka windsock. on his microphone….that’s when you’d put it over the mic if it was shocking you or something like that. Slim took it off his foot, put it on the mic, did the show, put it back on his foot. DANG! Crazy MoFo!!!
Red’s is a crazy lil place that looks like nothing you’ve ever seen. its wild. A real honest to goodness Juke. Red has been real nice to us over the last couple so big thanks to him. I think we’re playing there Tuesday night which will be a good warm up for the IBC on Thursday.
Our new pal from Australia, Dan Dinnen was there for a jam too! Good times. I had to upload the video of us playing with Slim on Youtube cause it’s way too long to put on here. please check it out, I haven’t uploaded to youtube before so I hope this works! LINK IS BELOW. Here’s the pic …… 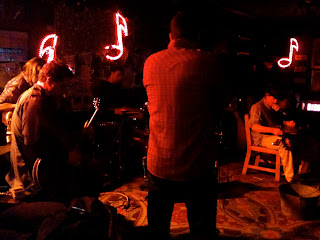 Here is the Video Link

PS….If you’re wondering where Slim is in this video……he’s the dude crawling on the floor!