Wow. What a week. I had an incredible time in Memphis. Heard so much great music. I played into the semi-finals and then was beat out but I didn’t feel bad for a second. I met so many wonderful people here and made loads of good contacts. I was in the same venue as one of my fav guitarists/songwriters…Ray Bonneville. I’ve been a fan of Rays for many years and I won’t lie, when i saw he was on the program I assumed he would win. Win he did. Ray took the first place in IBC solo/duo category. I saw him play three nights and he just killed it every time. He was very kind to me and I hope to stay in touch with him to gather some advice from him. He’s been doing this for decades longer than me and it sure showed. I have much to learn still.

The people I met were more than hospitable. The staff at my venue (Pig on Beale) were super nice to me and lots of fun. I got to see their smoker….HUGE! and smelled so good you almost want to crawl right inside of it! I’m pretty sure I met the actual Dos Equis guy (the guy the commercial is based on), Shook Bob Margolin’s hand (played with Muddy Waters), met great musicians…Vinnie C form Tupelo MS, Jake Brisco from Kansas City, Eric Hughes (veteran Beale st musician), The Pitbull Blues Band from Florida, Seth Stainback from Virginia Beach, Shaka from Conneticut, and many more. I hung out with Conor Gains Band, Jesse Roper, 24th St Wailers from Canada, finally met Johnny Max from Ontario and so much more. I also did a internet TV shoot for Ditty TV. Awesome studio and super pro set up. Great People too. Here’s the concert.

One highlight was the Canadian showcase. I was never more proud to be Canadian amongst all that talent. Just a blast! Huge kuddos to Liz, Alison and Gary form Ottawa Blues society for being so supportive of me and ALL the canucks. I also had the pleasure of hanging with my pals Paul and Erica from Ontario/Vancouver and Alex and Kara Lee Golata from Ottawa. Alex and Kara own Irene’s Pub in Ottawa and if you’ve never been you must. They do live music five nights a week and it’s a great joint. I need to say a special thanks to them as they treated me with so much generosity while in Memphis. Truly great people. 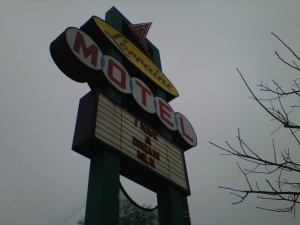 I hit the Museum of Civil rights where Martin Luther King was shot. Such a heavy duty place. Hard to keep it all together there ya know! I met Jacqueline Smith who lives on the street bu the Museum. She was kicked out of the Lorainne Hotel in 1988 when they converted it to the museum and she’s been living on the corner her since then. Quite a lady.

I had some great eats in Memphis too. Ribs at Rendezvous, Tamales and Gumbo at Blues City, pulled chicken sammiches at Pig on Beale, Gus’s fried chicken (wow!), brekkie at the Arcade and finished with a texas toast burger at Huey’s.

All in all the IBC is a great event. Kudos to the organizers and all the volunteers for donating their time selflessly. Yall Rock!

Today I drove to Clarksdale and checked into the Shack Up Inn. I’m here for a few days and tomorrow Kevin Houston is arriving to set up our mobile studio and we’ll record for a couple days. Really stoked to see Kevin again (he recorded Redemption) and hang here in the Delta.

So many great memories from last week that I know I’m forgetting half and they’ll come back to me over the next few days. I’ll likely post another blog up later this week. I’m also posting a few different pics on my Ross Neilsen Music site over at facebook. Check it out and hit like and share if you’re feeling it.

The vibe here in Clarksdale is already seeping into my head. I’m hoping to have time to write a tune of the week and get it posted soon. Doubtful it’ll be Monday though but stay tuned.

Before I split I want to say how much everyone’s comments meant to me while I was in Memphis. It’s so nice to know y’all have my back and I was most proud that when I got bumped out not one person posted anything like “robbed” or stuff like that. The talent is super level high down here and it was all legit. I saw on other peeps FB pages that their friends were saying that kinda shit and while I know it comes from a good place it isn’t necessary so I’m proud of all my support people for taking the high road. You’re all a fine example of good peeps. Keepin’ it real. Thank you for your love. Right back at ya!