Well it’s no secret that in our line of work you get to meet some real gems. Some of you who know me well will also know that, for some reason, I seem to be  a magnet for strange people to approach me on the street, in bars or where ever. It seems that hasn’t changed on this tour either.
Last blog entry we were about to rock Bud’s on Broadway. This place is awesome. It’s like a mini Blues on Whyte in Edmonton. Sketchy old blues bar. I love em like this. Its always entertaining and you never know what you’ll get. Straight outta the gates there was a friendly crazy guy. All chatty and shit. I don’t think the bastards would disagree if I said I have a higher tolerance for these type of folks. It’s always interesting for a little bit. Certainly, after a while it can be taxing to be civil but I do enjoy the conversation for a bit anyway….
After sound check we loaded into the Band house. Initially we thought that this was number two for disgusting places to sleep while on the road…..i’ll elaborate on that in a bit. Anyway we had fun shows there to modest crowds. The staff were real awesome and we had a good time having pops with ’em. We also got to go see ‘it might get loud’. This is a documentary about the electric guitar with Jack White, Jimmy Page, and The Edge. It was super awesome. Even Karl loved it!! Needless to say the show that night was extra inspired.
Here is a pic of us being billed incorrectly. 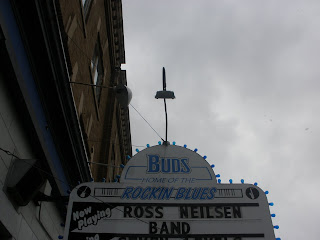 As an aside, and this has nothing to do with Bud’s- we really had and awesome time there,
I’m not sure why this happens so much but it does. I know some peeps are afraid to bill The Sufferin Bastards for whatever reasons and some folks just can’t be bothered to spell my name correctly and sometimes thats just the way it goes….but…when your name is billed correctly in one spot, last name spelled wrong in another, one saying & The Sufferin Bastards while another says Ross Neilsen Band, I can’t help but laugh. It doesn’t take much to check, but I guess people assume it’s the more common spelling.
On the weekend past we hit Weyburn and Medicine Hat. Weyburn is a small town in the middle of nowhere. We played a Joint called Pump jack’s Saloon. Troy, the owner was super awesome and seemed to really dig the band. He also fed us some killer Rib-Eye steaks. We were in heaven. After the show we hit a wine store and then went to the hotel. The hotel reminded us a lot of ‘The Voy’ in North Bay. Different walls but they seemed to have the same secrets behind em. The floors even sounded the same. Our pal Andrew hipped us to the fact that there use to be a Mental   Institutethere up until the 70’s. Here they apparently we’re “innovators” in Lobotomy and LSD experimenting. We all agreed a field trip to the Institute would be in order. We were pretty bummed to hear they demolished the building some years back. Imagine the secrets that blew up with that building. They were doing this crazy shit back in the mid Nineteen Hundreds! Had to have been messing around in ways they shouldn’t have been!
I slept almost the whole way to Medicine Hat. It was awesome. We rolled into The Ottoman Lounge and had some great burgers! We played two vicious sets to a tiny, tiny crowd. This is such a great room. They serve a tasty Mohito as well. Sean Davis is the fella that looks after the joint. He’s a good guy and a great host. After the show we enjoyed some late night pops at his place. There were a lot of Rusty Nails making morning hard to get along with. Here’s a pic…. 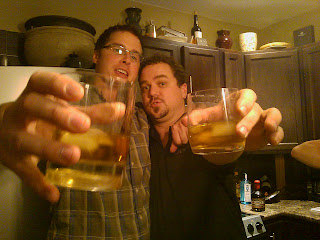 Fortunately we enjoyed some mimosa’s with our patented Bastards Breakfast. After a quick load out of our gear into the club (spiced up by some crazy guy stopping by to chat with us) we were back on the road to Edmonton. Here is a fuzzy pic of the Heavens…..(and a Truck)….. 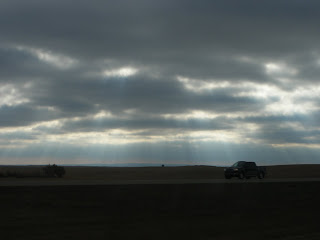 We arrived safe and sound at The Edmonton Bastards Villa. Great to see our Villa manager Jim again. We love his place cause it’s got a full kitchen and a natural gas BBQ. Very cozy indeed. Jim’s tolerance at us being in the house are amazing and we certainly appreciate it!
Monday we loaded into Blues on Whyte for the first of 6 back to back nights. This place is the original crazy town and there is rarely a dull moment. Right away a friendly walking talking piece of crazy came right over and got the conversation going right away! Good sign.
This was typically the number one nasty accom on tour for us but i gotta say, walking down the hall to my room it not only smelled like mister clean but there was a vacuum in the hall! My room was spotless and I almost considered laying down on the bed! Shawn’s room seemed to be haunted as the TV was on…….So I think we now officially move Bud’s up to number one…BUT…..Don’t get me wrong folks….I’m not complaining. It’s all part of the charm of each of these places!
Anyway, Today we all had a pile of errands to get through and I must say, we took the west end by storm. Got all our errands completed and then some. We had a lovely Bastards dinner created by Karl Bastard. Peanut Coconut Currie. here’s a pic…….. 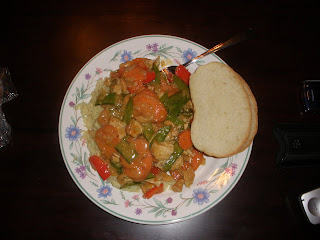 Now we prepare to head out for night two of fun (i mean work) in Edmonton. I’ll try and get some pics of some of the “friends” we meet. Stay tuned!
Ross