Well its a snowy Wednesday in Saskatchewan. We are gearing up to head north to the Stoon for two shows at buds on broadway. I’m excited about it because ONE: we got double booked there last tour and didnt get to play. TWO: a lot of guitarists that have had an influence on me have made a mark in that room. Should be fun.
The past few days have been pretty nice. We had a good run in Ontario for the first leg of the tour. The highlights for the GTA run of shows was definitely the Press Club. For a midweek show we sure had a great time. There were a bunch of Fredericton folks there and we rocked em hard. Good times all round. On friday we drove to Collingwood to perform at JD’s bar and grill. I have performed here a few times over the last two years. This was to be the last night for JD’s as the next day they closed their doors. We were pretty honored to be the last act and we celebrated by having our pal Aaron Garner sit in the second set with us and rip up some nice blues licks!
The next day we started the first of three back to back eight (+) hour drives. Northern Ontario is a confusing landscape. Beautiful lakes, awesome sunsets and mind sucking long ass drives. The first on the list was Loplops in the Soo. Not a huge turnout but way better than the last time we were there for sure! Good people here.
After The Soo it was another long haul to our old arch nemesis Thunder Bay. Its no secret that there isn’t much we like about Thunder bay. The one thing we do like though is Sheila Rock, her mom Tina and The Apollo Bar. While there is not a lot of support in the town for the bar it IS and awesome place to rock. A great sound system, nice sound guy and some of the best home cooking out there. Ths time there was a band from Calgary called Friendo. We had an amusing conversation with Henry, their drummer, about how and what we eat on the road. His eyes got really wide with amazement when we said we travel with a coleman stove and make sandwiches as well as lots of other great creations when the kitchen space is there. Their guitar player, Nicole drew us an amazing cartoon while we were performing. It’s quite amusing. 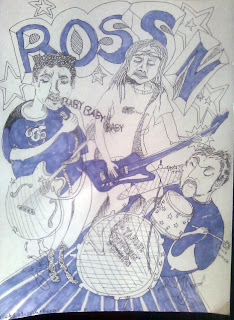 After we rocked The Apollo and crashed we were up and at em bright and early. Even though this was our first day off in nine back to back shows we had a very good reason. My cousin, Kristin’s cooking. Every time we tour she serves up one of the most amazing meals. This time was no exception. A full on Turkey dindin with all the fixins! Hell yeah. We were also happy to get there earlier than our usual late night arrival and looked forward to a good nights sleep. What we did instead was beverage until the wee hours came and went. Also a fairly normal occurrence when we get to hang with family from afar. So a huge thanks to those fine folks in Stonewall for making us feel so at home. Truly good times.
Well we’re off to load up ruby and get her out in the snow. Wish her luck. Saskatchewan, we wish YOU luck. The bastards are in town.
MB