So we’re at a cafe/bakery downtown North Bay. We are looking for coffee. we order three coffees. At the last minute I had to order a brownie as well. I think Shawn Ordered a tart of some kind. No surprise there….I split the store before Gans gets his order in.
I go outside and learn that the coffee at the bakery/cafe is shit. Basically brown water. Fail. I’m bummed. Shawn comes bursting out of the shop laughing hysterically. Shawn says the lady, that made the shitty coffee, says to Gans…”Anything sweet for you”? Gans replies…” I’ll have two gingerbread men”. WTF WTF WTF??????????? I lose it. Hilarious.
Even more hilarious was his cute little gingerbread man. Maybe you had to be there.
A few minutes later I try the brownie. FAIL. I was furious. It burns me when you by a brownie at a freaking bakery and it taste like a month old brownie dipped in water. Horrible. Way to go store. Your window says “bakery/cafe” yet both those things are bad. Give it up. It’s not hard to make a decent brownie. I’m not talking like I need a “Karl’s niece Tory”  (aka best brownie ever) brownie here. Just something reasonably good.
For the record Karl’s sweet little gingerman treats weren’t too good and Shawn’s tart was also not good. all round fail.
Anyway the great part is I got a pic of Gans’s frosted friends….what ARE they doing? 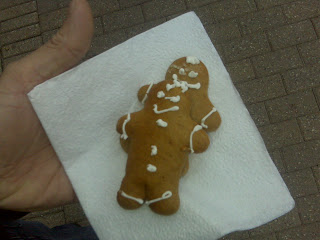